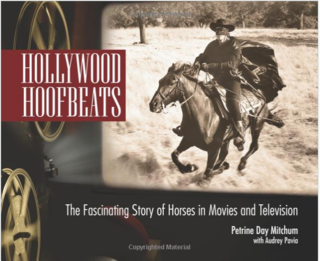 Horses have captured the imagination of man for centuries, inspiring poets, painters, songsmiths, novelists and dreamers of all ages. But no medium has captured horses like motion pictures. The essence of motion, these magnificent creatures have traveled through cinema’s varied terrain since its inception. Playing roles that range from the practical companion of man to the winged Pegasus of his fantasies, the horse has been an essential part of motion picture history. In fact, the very first American movie star was not a dashing Romeo or seductive damsel. The first movie star was a horse.

The first horse to present his image to a filmmaker was not a well-schooled actor’s mount, or a skilled trick horse trained to rear on command, untie knots or speed the hero to victory. The first horse in the history of American film was a Standardbred harness-racer with the unlikely name of Abe Edgington.

Abe Edgington's place in history was guaranteed in 1878 when his owner, wealthy railroad magnate and one time-governor of California Leland Stanford hired a British-born photographer named Eadweard Muybridge to photograph his horses. Stanford's intention was to prove that a racing trotter going full speed suspended, for a split second, all four feet simultaneously. Muybridge relished the opportunity to explore equine motion on film--an experiment that would change the world forever.

Muybridge--whose prior work had been photographing California's wild places--began by shooting a series of photos of Abe Edgington pulling a sulky on a June day in Palo Alto, California. Members of the press were present to watch this historic event, which utilized 12 cameras with unique lenses and an electronically controlled mechanism designed to operate special shutters. Muybridge had placed wires underneath the racetrack at 21-inch intervals, and these wires triggered the release of the camera shutters as the sulky wheels made contact with the ground.

It took about half a second to take the 12 pictures, which clearly showed the high-stepping Abe Edgington’s four legs suspended in air in unprecedented motion pictures. Stanford had his proof and the world had the beginnings of a new art form.

Four days later, Muybridge successfully photographed another of Stanford's racing steeds, a horse named Occident, being galloped under saddle. Encouraged by what he saw, Stanford--who adored his horses and forbade farm hands to speak harshly to them--funded more of Muybridge's photographic experiments and provided a number of subjects from his Palo Alto Stock Farm. Within two weeks, Muybridge had produced six moving photographs of Stanford's horses, showing them walking, trotting and galloping. These moving photos were published as photographic cards entitled "The Horse In Motion."

The revolutionary "The Horse in Motion" cards aroused international interest and Muybridge was subsequently commissioned by the University of Philadelphia to take "moving pictures" of a number of animals, including more horses. By the time Muybridge completed this work, he had shot 20,000 pictures, many of which featured random horses by the name of Daisy, Pandora, Billy, Annie G and Bouquet. Along with Abe Edgington, Occident and Stanford’s other horses, these unsuspecting animals were among the world’s first movie stars.

The ultimate guide for newcomers to the horse world.

Horseback Riding for Dummies
Learn the basics on riding a horse, in both English and Western.
Hollywood Hoofbeats

The history of horses in the movies.